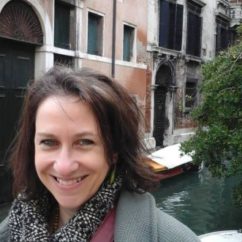 My previous job was in a small neighbouring authority with a fairly homogenous population. I was looking to work amongst a more diverse set of communities and in a bigger authority where there was potential to become involved with a variety of initiatives. I had also heard that the team was very friendly, cohesive and supportive – which indeed proved to be the case.

One of my favourite things about this job is my role in carrying out individual assessments for the New Communities & Travellers Service of young people who appear to have complex learning and other needs. In the past two years, working alongside interpreters, I have devised and reported on bespoke assessments for children and teenagers newly arrived in the U.K., whether as EU Migrants or as refugees, from Syria, Slovakia, Poland, Somalia and elsewhere.

Because of its size and diverse population, you should come for the sheer variety of initiatives, projects and partnerships you have the opportunity to be involved with. But even more importantly, in my view, the special spirit that people who live and work in Bradford show – I’ve never worked anywhere where people are as grateful and appreciative of what we do, as they are here.

This website uses cookies to improve your experience while you navigate through the website. Out of these, the cookies that are categorized as necessary are stored on your browser as they are essential for the working of basic functionalities of the website. We also use third-party cookies that help us analyze and understand how you use this website. These cookies will be stored in your browser only with your consent. You also have the option to opt-out of these cookies. But opting out of some of these cookies may affect your browsing experience.
Necessary Always Enabled
Necessary cookies are absolutely essential for the website to function properly. This category only includes cookies that ensures basic functionalities and security features of the website. These cookies do not store any personal information.
Non-necessary
Any cookies that may not be particularly necessary for the website to function and is used specifically to collect user personal data via analytics, ads, other embedded contents are termed as non-necessary cookies. It is mandatory to procure user consent prior to running these cookies on your website.
SAVE & ACCEPT