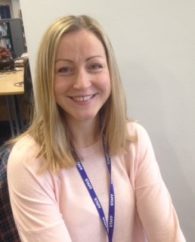 I was attracted to Bradford as it’s close to home for me – I live in Pudsey, which is right on the edge of Leeds. It’s a 20 minute drive to the office and I’m really close to many of the Bradford schools. I like the fact that Bradford is small city- the office is in the city centre and everything you need is close by- handy for nipping out at lunchtime! Bradford is such a diverse city and it’s full of culture- there’s often something of interest going on in City Park which we can see from the office window. It’s a great place to work.

I’m involved in a project around mental health in schools and promoting Mental Health Champions. My role, with a colleague, is to devise a series of assemblies for schools to raise awareness of issues in mental health, and to get these out in the open. It’s really interesting work and as well as supporting schools I’m learning a massive amount too.

There’s such variety here in Bradford- from the inner city schools to those out in small villages and towns. You don’t have to drive far before you’re out in the beautiful Yorkshire countryside! There’s a real team spirit- for example, in March we’re taking part in the Bradford Dragon Boat Race to support the charity Young Minds, and we’re holding events prior to the race to raise the funds. It should be really good fun. I’ve been working in Bradford since September and have felt really well supported by the team.

This website uses cookies to improve your experience while you navigate through the website. Out of these, the cookies that are categorized as necessary are stored on your browser as they are essential for the working of basic functionalities of the website. We also use third-party cookies that help us analyze and understand how you use this website. These cookies will be stored in your browser only with your consent. You also have the option to opt-out of these cookies. But opting out of some of these cookies may affect your browsing experience.
Necessary Always Enabled
Necessary cookies are absolutely essential for the website to function properly. This category only includes cookies that ensures basic functionalities and security features of the website. These cookies do not store any personal information.
Non-necessary
Any cookies that may not be particularly necessary for the website to function and is used specifically to collect user personal data via analytics, ads, other embedded contents are termed as non-necessary cookies. It is mandatory to procure user consent prior to running these cookies on your website.
SAVE & ACCEPT