You are here: Home / About Bradford 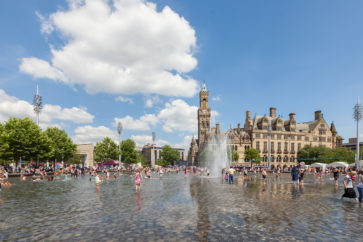 Bradford is a pioneering, confident and connected place. The fifth largest city authority in England, it is home to a diverse and growing population of 537,200.  One quarter of the population is aged 16 or under, making us the youngest city in the UK.

Globally connected and at the heart of the Leeds City Region and the Northern Powerhouse, the district has a rich and varied mix of cultures, languages and communities. Over a third of people are from ethnic minorities with many maintaining international links and trading relationships.  The geographic diversity of our communities ranges from urban inner city and outer suburbs and estates to towns and rural villages – while the District forms part of the West Yorkshire conurbation two-thirds of it is rural and home to spectacular landscapes.

The economy is worth £9.5 billion and is the eleventh largest city economy in England. Bradford was named ‘best place in the UK to start a business’ in the Barclays SME Growth Factors Index.

Bradford District has a powerful culture of entrepreneurship; of a working age population of 330,000, some 30,000 are self- employed. The numbers of businesses has grown by 24% over the last five years, outstripping growth rates across Leeds City Region and the UK.

Productivity, based on per hour worked, is one of the highest in the Northern Powerhouse and recent estimates value Bradford’s exports as worth £2 billion per year, equating to £10,500 per job.
There are 15,785 businesses in Bradford employing 205,000 people and the city houses the headquarters of the grocery giant Morrisons, Yorkshire Water, Yorkshire Building Society and Yorkshire’s largest family-owned company JCT600. PwC, the global accountancy giant, unveiled its new national assurance centre in Bradford in May 2019 occupying 9000 sq ft of office space.

Key digital innovation initiatives have emerged in Bradford including the Digital Health Enterprise Zone and the Advanced Digital Institute. Our thriving digital sector is central to our future economic success and currently includes 700 businesses employing 4,500 people.

The multi award-winning City Park represents the most significant investment in the continuing regeneration of Bradford. This flexible public space is home to the Mirror Pool, the largest urban water feature in the UK; a beautifully lit fountain light and laser display; and a thunderous 100ft water jet. It also hosts an events programme which has attracted hundreds of thousands of visitors to the city centre.

The city centre has been transformed further with the opening of the Broadway shopping centre and a Light cinema. Construction is underway on a 4,500 capacity live music venue in the former Odeon cinema, a new city centre food market and more restaurants. Bradford Council has recently announced Muse as its development partner for One City Park, a new state-of-the-art office building at the city centre’s award-winning City Park and the next step in the ongoing growth and regeneration of the entire district.

Another notable addition to the city centre is Sunbridge Wells, an underground complex of redeveloped old Victorian tunnels and buildings housing shops, bars, restaurants and even a brewery.

Bradford has a growing national reputation as a leader on the inclusive growth agenda.

In November 2019, Bradford was named Britain’s Most Improved City in an influential annual report on economic wellbeing following a record reduction in unemployment and significant growth in skills. The nationwide study, Good Growth for Cities 2019 by think tank Demos, measured the performance of 42 of the UK’s largest cities against a range of 10 priorities including jobs, health, income, skills, work-life balance, housing affordability, travel-to-work times, income equality, environment and business start-ups.

Home to Hockney, the Brontes and the world’s first UNESCO City of Film the District is home to a vibrant  and diverse cultural offer attracting over 10 million visitors a year.

Film-makers and TV companies flock to the district to shoot period and contemporary dramas like Peaky Blinders, Ackley Bridge, The ABC Murders and the current Keira Knightley and Ralph Fiennes thriller, Official Secrets. The corridors of power in Bradford’s Grade 1 listed Venetian-style City Hall have been used to film scenes for the soap operas Coronation Street and Emmerdale as well as for dramas like Room at the Top and National Treasure.

The impact of UNESCO City of Film on the international profile of the District and the wider region goes from strength to strength with a new office launched in Qingdao, China, home to one of the biggest film studios in the world that will help drive co-production and investment opportunities.

The city has long been home to the National Science and Media Museum, which houses an IMAX cinema, restaurant, galleries and an exhibition space and is the country’s largest visitor attraction dedicated to the science and culture of image and sound technologies and their impact on our lives.

It has recently attracted top West End productions like War Horse, Mary Poppins, The Lion King and Billy Elliot. Productions coming to the Alhambra this year are Joseph, Inspector Calls, We Will Rock You, The Sound of Music, Madam Butterfly and La Boheme.

The Alhambra’s sister concert hall, St George’s Hall, reopened in Spring 2019 after extensive refurbishment and the former Odeon will finally begin its transformation into a music venue that should put Bradford firmly on the UK tour itinerary for some of the world’s hottest bands.

In 2017, we opened the new David Hockney Gallery in Cartwright Hall Museum and Gallery to mark the 80th birthday of the world-famous Bradford-born artist. This free permanent gallery is dedicated to his life and work and houses a collection of his sketches, paintings, iPad drawings, prints and photographs. It sits alongside Francisco Goya, William Blake and Andy Warhol while more Hockney works grace the 1853 Gallery at Salts Mill.

The Impressions Gallery in City Park is one of the leading independent venues in the country for contemporary photography.

Culture and history rub shoulders at Bradford Industrial Museum, the Brontë Parsonage in Haworth, Cliffe Castle Museum in Keighley, and nearby East Riddlesden Hall. Bingley’s Five-Rise Locks staircase, the most spectacular feature of the Leeds and Liverpool Canal, and the steam engines of the Keighley and Worth Valley Railway offer another look back at the district’s industrial past.

Bradford is a multiple winner of Curry Capital of Britain and the district has a vibrant mix of restaurants.

The Bradford Literature Festival returns to the city centre each July  and is quickly followed by the Bradford Festival showcasing the best of arts and culture in the city.

The fifth Tour de Yorkshire, the annual international professional cycle race showcasing Yorkshire to the world, returned to Bradford District in May 2019 with spectacular hill climbs along the world-famous main street in Haworth and the Cote de Goose Eye. In September the UCI World Road Championships visited the district twice. The Women’s Elite race started in Bradford city centre and the Men’s Elite race will passed through Ilkley.

Our award winning Roberts Park in the UNESCO World Heritage site of Saltaire will once again host the Dragonboat Festival in June.

Bradford is located at the centre of the UK, with the M606, a spur off the M62 motorway, connecting it to the national motorway network. It has direct rail connections to London, and Leeds Bradford Airport is just six miles from the city centre.